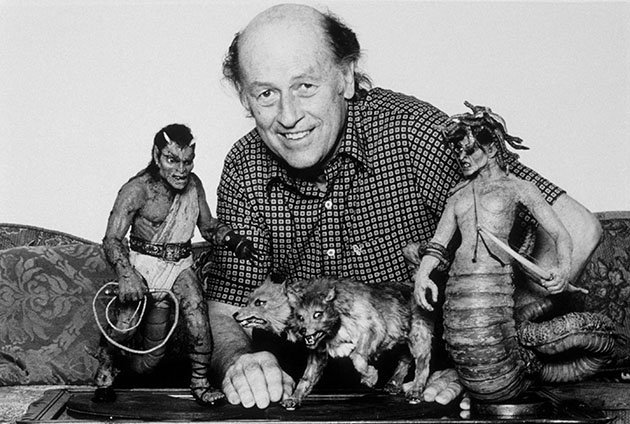 It’s not yet been a week since I heard the sad news that Ray Harryhausen had passed away.

I wrote a brief summary on Facebook about two very special encounters I was lucky enough to have had with Ray and I wanted to make this more ‘official’ here on my own blog, since Ray Harryhausen was one of the key inspirations and influences in my life. Here’s what I wrote.

Oh no, I just heard about Ray Harryhausen..

I was lucky enough to have met Ray twice, once when I was 17 he allowed me to come and interview him at his house in London for an A-Level Art project I did on him; he was incredibly warm and generous and also serious about all his amazing creations.

He gave me a fantastic interview and even treated me with humble respect by criticizing my own foam rubber tyrannosaurus that I had brought along to show him..

“T-Rex wouldn’t have been able to get enough to eat back then – your dinosaur is too fat”.

I went home to rethink my T-Rex, amazed that he’d given me the time of day and blown away that I had met Ray, and I have been ever since.

He and his films inspired me to want to bring monsters to life and really I think of his work every day – he was the reason I chose to make ‘Butterfly’ my stop-motion film and why I attempted to do everything in camera, with models and armatures and pointers and shoot it all on 16mm film.

Then, I was lucky enough to meet him again a few years back at the Edinburgh Film Festival where I sat next to him for special dinner and he was just as warm and interesting and interested. Following a discussion over dinner he gave me another piece of advice that I’ve lived by ever since. In fact it was a question followed by a firm word of advice..

Toward the end of dinner, he put his hand on my shoulder and asked…

I nodded, yes, I think so. And then he looked at me and said firmly…

“You’ve got to be resilient”

and I’ve thought about that a lot over the years since. It’s good advice.

Below are a few pics from that special dinner, I’m going to unearth the ones of Ray looking at my fat tyrannosaur and add them in when I do.

Thanks Ray for being such a great inspiration to so many, and for allowing my imagination to run wild and believe in fantastical monsters then, and now. A truly great, skilled and kind man. 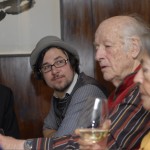 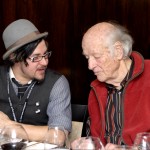 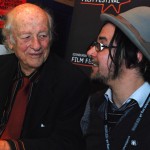 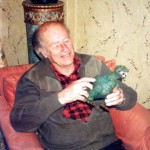 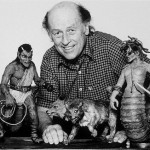